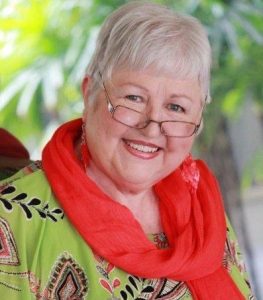 Colleen was born in Wauchula, Florida.  She graduated from Hardee High School and later Florida State University.  She taught for two years in Satellite Beach, Florida, then went to England, Germany, and Japan to teach on Air Force Bases as an employee of the Department of Defense.  During her six years with DOD she traveled extensively.  Being a Florida girl, she saw her first snow in St. Anton, Austria.  She also experienced the Swiss and French Alps.  After her first white out under the sight of the Great Matterhorn and lots of prayers when the sun peeked out, she took off her skis and walked down the mountain.  When summer arrived, she spent three weeks in East Africa.  It was one of her most amazing trips.

Colleen moved to Lakeland in 1992 with her daughters and has lived here since the girls flew the nest. She became active with the Republican Women’s Club as well as her church, where she served as Director of the Singles Department as well as other committees and activities.  She taught in Florida for 24 years, plus some time in Georgia and for the DOD.  She is now retired and enjoys her time with her family and tries to stay out the doctor’s office as much as possible.

Colleen has had the pleasure of working on both of Jeb Bush’s campaigns for Governor and his brother George Bush’s campaign for President and even attended his 2001 inauguration.  She has also worked on all of Dennis Ross’ campaigns.  She has enjoyed being active with her Republican friends and hopes to continue doing so here in Lakeland as long as life allows.