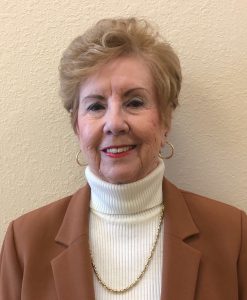 Lou grew up in Lakeland and was married to her husband, Don, for sixty-two years.  Don passed away on May 28th last year.  She has two children, five grandchildren, and four great grandchildren.  She graduated from Lakeland High School and became a telephone operator.  After her children were born, she became a stay-at-home mom for about ten years.  Lou was in banking for eight years and retired when Don was transferred to Chicago to work at IMC Headquarters.  They always enjoyed boating, golfing, gardening, and traveling.  She presently lives at The Estates at Carpenters and serves on the Executive Board as Secretary/Treasurer.

She served as the President of the Republican Women’s Club of Lakeland from 2002-2004.  During that time, the Club participated in several events such as education presentations and scholarships, RPOF meetings, NFRW and FFRW Conventions, Polk Leadership Dinner, Literacy Projects, and Governor Bush’s Inauguration, to name a few.

In 2002, she also became Precinct Committeewoman on the Polk County Republican Executive Committee and continues to serve in this capacity.  She has worked on several Presidential campaigns and continues to be involved in community activities, such as mentoring at Girls, Inc. of Lakeland, hosting a candidate forum and voter registration at Carpenter’s Home Church, installation of Polk County’s Foundation Rock in Bartow, supporting our Troops with supplies & books, Putnam “no campaign” events, and Polk County Pig Roast.  She was also a Lakeland Chamber of Commerce Member and Co-coordinating Council of Organizations Member through the Republican Women’s Club of Lakeland.